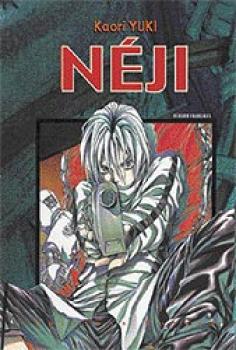 "Fairly enjoyable, recommended for fans of the author." by V. Krätke (Netherlands) on Aug 2, 2005

I've enjoyed whatever one-shots I've read from Kaori Yuki so far. Neji was also a good read, though I'd mostly recommend it to die-hard fans of Angel Sanctuary or Yuki's works in general.
Neji is a story told in three loosely connected chapters, all of which've been collected in this single volume. It takes place in a futuristic world, where a sinister research center brings select dead people back to life in order to use them as living weapons. For these so-called revenants wield strong psychic powers and have no will of their own. Our protagonist Neji, however, is a different kind of revenant. He still has memories of his former life and an independent will. The troubled Neji ends up fleeing the research center. While on the run and trying to survive, Neji meets with some fellow troubled souls in his gritty world.
The art style changes a lot throughout the book, since Kaori Yuki has written these three stories over a span of several years. As such, the first story still has that slightly fat-faced look of her 80's work, while the last story in the book (which dates from 2001) reflects her sleeker recent art style. The stories themselves are at times confusing. Kaori Yuki often packs her pages full of text and events, and in her less skillful early stories, it's hard to keep track of what's going on. The third and by far best story in the book is in fact just a variation on Blade Runner, but it looks stylish enough to hold one's attention.
Some of the themes and character designs in Neji strongly remind one of Angel Sanctuary. For instance, the Batsu character looks a lot like Michael from Angel Sanctuary, and there are definite shades of Rosiel in Neji's Sophia character. These little touches should be interesting for Angel Sanctuary fans. As for casual readers, Neji is a decent enough buy, but it never reaches mind-blowing levels. For one thing, it doesn't have that tinge of visceral gore and twisted madness that usually makes Kaori Yuki's works stand out. Compared to stuff like Boys Next Door, Neji is pretty tame. And without Yuki's usual macabre visions, Neji doesn't quite have the impact it should. It's okay, but Kaori Yuki has done better.