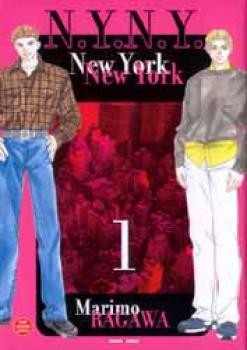 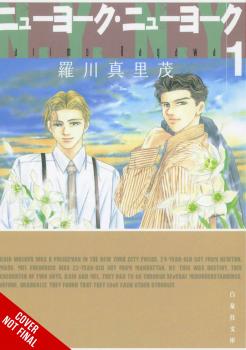 Take the angst and tragedy of Zetsuai, crank it up by a few more notches for good measure, then transplant it to an urban American setting and mix in weighty diatribes about the pains of being in the closet, and you've got New York, New York in a nutshell, a sort of anti-Fake. It's a mixture that looks pretty, but is rather too heavy to swallow. The tragedy factor goes so far over the top that it's hard to take seriously for most readers.

It's almost as if the author equates personal tragedy with character development; our two leads are a pair of sad puppies indeed. Waifish blond Mel's life is peppered with suicide attempts, dying loved ones and unhappy affairs. Two brutal rape attempts are inflicted upon him in the first volume alone, just for good measure. As for Kain, the dark-haired and therefore more masculine half of the pair (it's a law or something - dark hair in a yaoi manga means you get to boff an invariably wimpier blond lover), all we know about him is that he's leading a life in the closet and finds it very uncomfortable. Now, I won't argue that being in the closet, or facing a coming-out *isn't* a very stressful thing, but New York, New York doesn't handle the subject very aptly. The manga constantly reminds the reader of Kain's closeted life by throwing up situations where it's shoved in his -and thus the reader's- face that it's hard to stay closeted for as long as he has. That coupled with random disasters befalling Mel is pretty much the gist and gravy of this manga. And frankly, it gets tiresome very quickly. The author probably wanted to make an earnest story about the hardships that an almost completely hetero-centric world imposes on its queer denizens. I applaud the sentiment, but regret that it didn't make for a very entertaining read.

The manga gets brownie points for its pretty art, though. Everyone looks eye-pleasing, but not ridiculously gorgeous, and impossibly skinny androgynous boys are mercifully absent. It's a pleasingly down-to-earth look which sharply contrasts with the story's over-the-top tragedy. New York, New York was probably intended as a down-to-earth story as well (it's certainly marketed that way, judging from a preface for this French edition that sings the praises of tolerance and individuality). But it goes so far overboard in its attempts to generate sympathy for its perpetually tormented leads that it's borderline silly. To complete this manga's unintentionally silly effect, everyone peppers their phrases with Engrish ranging from 'good morning' to 'Shut up! Mr. Butch Queen!' - no, seriously. Maybe your average 'lol kawaii!!!' 14-year old fangirl will get a three-hanky slobber out of this and believe she has learned something meaningful about actual gay life. Good for her, I suppose. To others, I can only recommend New York, New York if you really dig tragedy. It's not awful, but it doesn't succeed as a down-to-earth story about a 'real' gay couple, though it gets marketed as such. There are far more entertaining translated yaoi manga out there. And if you're looking for some tasteful, actual gay fiction, go read a damn book once for a change.