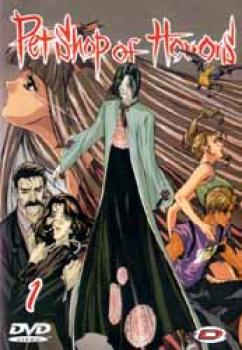 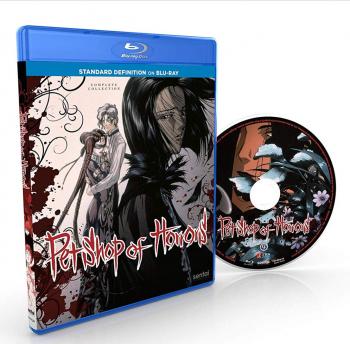 Dynamic Visions is being rather stingy by spreading this series over two DVD's with no extras whatsoever when the whole series could easily have fitted on one disc. I've picked up both DVD's from a bargain bin for roughly half their original price, and I quite enjoy viewing the occasional episode from time to time to bask in the weird and elegantly eerie atmosphere of the series. The material on these discs is definitely quite good, but it's not -quite- stellar enough for me to recommend buying both DVD's at their full retail price. For many, the mere forty minutes of animation you get on each DVD won't really warrant the steep asking price.

That aside, it's obvious someone took great pains to make this look like a polished product. The packaging is very nice, with some lovely art on the cover and loads of colorful images gracing the back and the inside of the DVD's insert. The various menus are souped up with some animated sequences taken from the episodes themselves. This actually means it takes quite some time to navigate the disc menus, since you have to sit through a little animation sequence for each menu you access. This may be a bit cumbersome when you quickly want to toggle some audio or subtitle settings, but you can usually use the DVD remote as well, so it's only a minor problem. It's nice to see the amounts of care that went into the menus, all the same.

The two episodes on this disc are quite entertaining spooky little vignettes. There isn't really an overarching story that ties the individual episodes together. Instead, they're fairly standalone tales of one particular customer of Count D's weird little pet shop and the personal tragedy he or she seeks to overcome with help of an unusual pet. Count D's shop might as well be the same Chinatown store seen in the movie Gremlins, except with a prettier shopkeeper. Each customer is even told three strict rules to follow concerning his pet ('never feed it after midnight!'), usually with dire consequences should the rules be breached.

The first episode is an enjoyable light chill ride (anyone who manages to make the sight of a little girl clutching a cookie look creepy knows their stuff) whereas the second is a slower affair, more focused on drama than flat-out scares. Both stories, however, are firmly grounded in fantasy and require suspension of disbelief to really work. There are things less plausible in there than the concept of a shop selling monsters. A blond cop named Leon does some very loose investigating of the Count's suspicious shop on a regular basis. But since he dresses like he's on a constant 1980's flashback and usually ends up having tea and a nice chat with the Count instead of doing anything resembling real police work, the police as a whole are hard to take seriously in this series. Similiar stretches in imagination crop up in other places (such as a -very- far-fethced excuse to get rid of a whole army of killer rabbits). A few other goofy elements in the story and a cheesy J-pop opening song further drag the overall seriousness of what is supposed to be a horror story down a few notches. But these aren't really a hindrance so long as the atmosphere works, and it usually does.

The art and animation quality is more of a mixed bag, though. While still-shots look polished, there is hardly any truly spectacular animation in here. Drops in detail and clumsy motion whenever things are required to show some complex movement suggest that these OAVs didn't benefit from a stellar budget. What did stand out as a bright spot in these OAV's was a great performance by Toshihiko Seki as the Count's voice. His suave, caressing voice really brings the character to life, and he skillfully pulls off the Count's goofy moments as well. Unless you're as much of a Toshihiko Seki fan as I am, though, it's doubtful if this will add a lot to your enjoyment of this disc.

Because the final verdict must really be that these OAVs are fairly nice, with an inspired premise, but not so absolutely groundbreaking that they warrant the asking price for this thinly-spread release of two DVD's instead of one. Maybe knowing the manga would make them more enjoyable, but I'm entirely unfamiliar with it. There's a region 1 release that bundles all episodes on one disc which is a far better option. Still, should you be able to find this disc cheap and be interested, the episodes on this first disc are easily the strongest of the lot, so it might be a good way to check the series out.