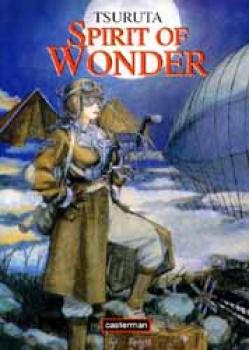 A big, fat volume, especially in comparison to the slender English version. It is mostly quite well done, though the reproduction is slightly off in some of the pages originally in color. The Casterman edition is flipped, but (usually) done with some care, often using panel rearrangement instead.

The additional stories in the book (over the English edition) feature other characters, though in all cases the basic scheme of wacky inventors and feisty pretty girls is maintained. (Occasionally the pretty girls *are* the inventors, by the way.) Just to forestall the usual rumors, the artwork in the other stories is also good, with character designs and layouts just as nice as in the Miss China stories. While I would agree that the Miss China stories are probably the best of the bunch, the rest of the production of the &quot;world's slowest manga artist&quot; is still worth a look.

The only downsides: Tsuruta's storytelling style tends to be very elliptical, so sometimes it can be a little hard to figure out. Also, the Casterman edition is a bit inconsistent on reading direction, so you may have to study a page a little to figure out how it's read. (They'd have been better off just leaving the whole thing unflipped, in my opinion.)