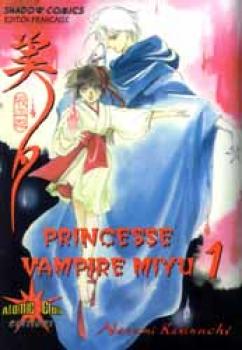 The Vampire Princess Miyu series has its share of fans, and I can see where its appeal comes from. But even though I enjoyed the short Vampire Princess Miyu OAV series a lot, and rather like Narumi Kakinouchi's art, my first brush with the manga that started it all left me rather unimpressed. I just couldn't really get into the whole thing.
This is partly because Atomic Club's French version is very poorly made. The translation is rather stilted, with a lot of grammar goof-ups that should not have gotten past a proof-reader and into any finished product worth its salt. I'm also not too mad about way the pages are printed - grey tones often look too coarse for comfort and black looks somewhat messy in this version, which really hurts the manga. Instead of being atmospheric and elegant, the lay-out of the pages often ends up looking sketchy and clumsy. The cover design is downright ugly as well.
Unfortunately, I'm not sure if I would enjoy this manga a lot more if I did get to read a decent edition. The stories feel too rushed to really work on paper. Things tend to happen too abruptly, and the obtuse narration only ends up confusing the reader, rather than drawing you into some unfolding mystery. The glimpses of Miyu's plight that we occasionally get are interesting, though, and it's possible that the manga will improve a lot in further volumes.
Alas, I can't really be bothered to find out if it does. The largely episodic stories in this first volume are just not skillfully told enough to really capture my interest. Whatever psychological angle there was to the plight of each chapter's victim characters wasn't conveyed with enough force to really be interesting. And before something truly gripping could develop, the story would usually wrap up all of a sudden. Boo.
Much better things can, and have been done with the concept of Vampire Princess Miyu, as is evident from the excellent OAV's that use a similiar formula to tell some much more intriguing stories. I definitely like the concept of Miyu and her tortured existence. It holds a lot of potential for thrilling, stylish psychological horror, but that potential is not carried out effectively here.