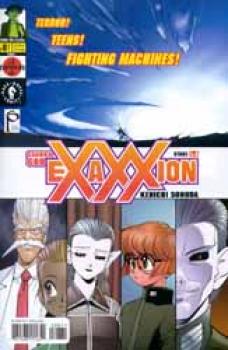 Hoichi's taken a hit - a Riofald kinetic round straight to the head of Exaxxion. The robot's okay, but there's only one problem. Hoichi isn't breathing! If the dude could wake up, he might notice that the humans are amassing forces all around his robot's head and feet. But no, he's off in la-la land, dreaming of days gone by... Meanwhile, Ambassador Shes'ka has problems of his own. His commanding officer on home world is demanding an explanation of the mysterious XXX alert, and he doesn't believe the ambassador's story that it was a false alarm. Drama and destruction abound as the curtain falls on Cannon God Exaxxion Stage 1.