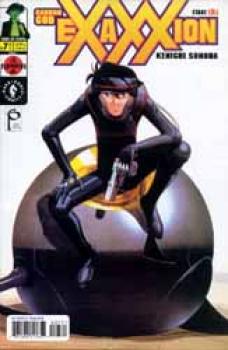 Hoichi's on the run, with an armada of steel-slicing, bone-crunching Riofaldian death machines hot on his tail! Racing to reach the giant robot Exaxxion before the vicious alien Ambassador Shes'ka can put an end to the human uprising and to Hoichi's life all eyes are on the young pilot as he fights his way through one alien threat after another, determined to reach his destination. But even if he does take the controls of Exaxxion, he's hardly had the training or experience needed to pilot the high tech behemoth. Add that to the fact that the U.N. military is treating Exaxxion like it's as much of a threat as the Riofaldians, and Earth's last defense could be over before it's even begun!