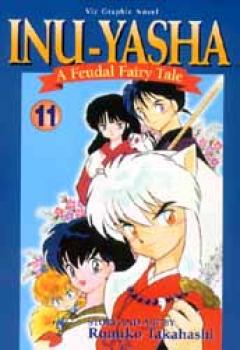 Other items in Inu Yasha manga US

When Japanese high school student Kagome is transported back in time to the feudal era, she accidentally releases a legendary dog-like half-demon named Inu-Yasha from his imprisonment for stealing the magical "Jewel of Four Souls." Bound to Kagome by a powerful spell, Inu-Yasha is forced to help her reclaim the jewel, now shattered into countless shards, to prevent other demons from using its power for terrible evil! When a would-be water god with a stolen spear of enormous power threatens to destroy a village, Inu-Yasha and company must find the real water god before it is too late! Then, the group comes across a decimated village with no clues to who did it. With a swing of the Tetsusaiga and the crack of splintering wood the culprit is revealed which turns out to be a shock for Sango!