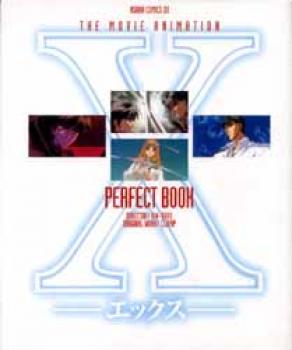 This beautiful book is dedicated to X: The destiny War animation movie directed by Rin-Taro, with character designs by Nobuteru Yuuki, and based on the work of CLAMP. Includes a film story digest using actual full-color cel art. Other sections are dedicated to the animation's characters, landscapes, computer graphics, and a stage section that shows the actual locations that were based for the film.

"Only really interesting for completists." by V. Krätke (Netherlands) on May 2, 2004

X: the movie really suffered from its mere 90 minute running time. Trying to cram all the suspense of the manga into such a short span of time was never going to work, but the movie failed to handle even the focus on Kamui, Kotori and Fuuma with any shadow of competence, which left the whole shebang feeling dumb, hollow and confusing. In a word, it was rubbish. However, it was very pretty rubbish, if anything. This book offers some basic info on the movie and an in-depth look at the making of all those pretty visuals.

This book is obviously not intended as an artbook. Only the first 32 of the book's 144 total pages are in color, and those color pages are filled mostly with screenshots from the movie. If you've seen the movie, you've already seen all the color images within this book. If it's a feast for the eyes you want, look elsewhere (note that it's misleading to list this book as an anime comic, which it very clearly is not). The focus is clearly on discussing the movie's technical aspects. Character sketches fill up the bulk of this book, and they're fairly interesting to browse through. Large, detailed reference sketches of the characters as well as pencil sketches for their more memorable scenes in the movie fill up page 33 to 105 of the book. It's an interesting glimpse at just how much attention to detail went into the cel art for the movie. If you have an interest in how animation is made, this could be quite an intriguing document. Ironically enough, getting a look at all the details also serves to highlight just how much of a shame it is that none of the characters ever get to do anything very interesting in the movie apart from mindlessly killing each other off.

The rest of the book contains some sketches of the movie's backgrounds (the Beast, Hinoto's audience room, etcetera) and a look at some of the actual locations in Tokyo that make an appearance in the movie. There are only about 12 pages that are filled entirely with text, but the large black-and-white portion of the book feels text-heavy all the same. The character sketches and background studies are all accompanied by notes in Japanese, and without the ability to read them, you¿ll clearly miss out on most of the actual information in the book, no matter how much you scrutinise the sketches.

It's not that there's anything wrong about this book in itself. For what it is, it's quite well-made. It just relies on Japanese text quite a lot to discuss a movie that's hard to really care about in the first place. Most people, even most X enthusiasts can probably live without this book. You'll only get the most out of it if you can read Japanese and really adore X: the movie. Frankly, I don't know which condition is harder to meet for the average occidental reader.