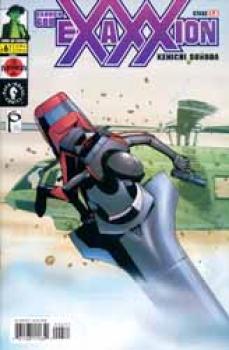 Just when things seem their bleakest, when it seems there's no way to halt the vicious Riofaldian invasion of Earth, a ray of hope rises above the hills of Japan . . . the giant robot Exaxxion! Armed to the teeth and ready to take on the deadly alien attackers, Earth's high tech defender is only missing one thing ¿ a pilot! The ruthless alien Ambassador Jess'ka has his sights set on destroying the giant robot, and if designated pilot Hoichi can't tear himself away from the suffering and casualties that surround him before the Riofald attack wave reaches Exaxxion, we can all kiss the planet goodbye!