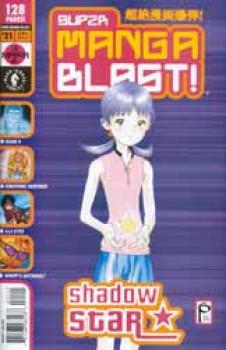 Just when you think it can't get any better, Dark Horse cranks their outstanding manga anthology up another notch! Club 9's hapless small town girl Haruo has had her share of man trouble since moving to the city, but nothing can prepare her for the advances of TV newscaster Tokugawa! Meanwhile, the plot thickens in 3x3 Eyes as Yakumo and Pai learn the hard way that saving their own skins may require them getting closer than they ever imagined, and in What's Michael? Michael's owners try to put the crafty tabby on a diet, but will it slim him down, or will there be more of Michael to love? Over in Shadow Star, the police put a tail on Akira, while Shiina tries to get to the bottom of who Sudo really is, and in Seraphic Feather, M-Zak gets a serious case of déjà-vu as memories of her past come flooding back. But there's no time for reminiscing, as the UN assault team roars through Apep's Human Development Lab. It's another knock down, drag out installment of your favorite manga, and it's all in Super Manga Blast!