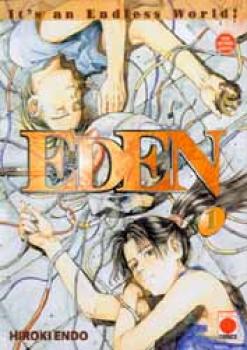 Other items in Eden manga FR

In the near future, a rapidly spreading virus, and the disorder accompanying it, kills off most of humanity. At first, it seems as if there are only three - or rather two-and-a-half - survivors: two youths, Enoa and Hana, apparently destined for the roles of Adam and Eve; and Rain, the crippled scientist who makes for a reluctant Jehovah. Appropriately, they live in the remnants of what was intended as a new Eden, a self-contained, self-sustaining experimental community. Without giving anything away, though, things prove to be rather more complicated...

By the way, the characters' names seem to have been inspired by Gnostic mythology, though I couldn't get their roles to line up very well with those in the Gnostic mythos.

Endo's artwork is meticulously detailed; his characters attractive and interesting. Despite being flipped, the G&eacute;n&eacute;ration (Marvel) edition preserves all this and more. Even the original color pages are rendered (in grayscale) rather better than the norm. I'd recommend this one, though I do strongly suspect there's going to be an English edition at some point; this one is a natural for the U.S. market. I will admit I became somewhat disenchanted with Eden after a few volumes, when it seemed to be just meandering along (and one of my favorite characters was killed, sob).