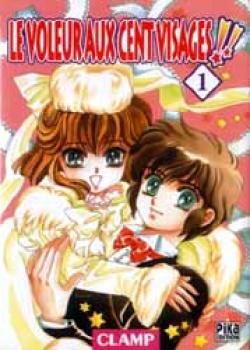 The romantic adventures of the 4th grade master thief, &quot;The Acrobat,&quot; a.k.a. 20 Masks, who apparently picks up 80 more for the French edition - I suspect they're playing off &quot;L'homme aux cent visages&quot;. More early Clamp wackiness, a pre/co-cursor of the Clamp Campus Detectives. (It started earlier, but Clamp didn't finish it off until after the Campus Detectives started, so you'll see some references to the latter in the final stories.)

Warning: While filled with the usual fun Clamp weirdness (e.g., Akira has two mothers, who seem to be mirror-image twins and act like two-year-olds, and his romantic interest Utako is in kindergarten, just recovering from a failed relationship with her teacher(!)), there are also long discourses on the nature of love and relationships that even Clamp seems to admit get a little tiresome occasionally. But if you're willing to skip lightly through these, it's fun enough.

The Pika edition is flipped, but fairly well done.