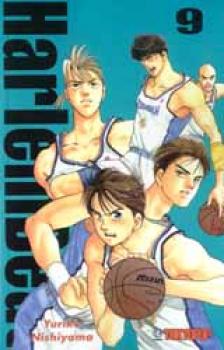 It's the championship game against Hara Commercial High, and Nate Torres has sunk a 25-footer at the end of the first half to give Johnan High a commanding lead. The second half, however, remains to be played. Hara's defense has gotten them this far, so there's no reason to think that they wouldn't be bringing their "A" game with them in this final game of the season. But anyone who knows Harlem Beat should be familiar with the skills that Johnan's Shurman and Kobayashi bring to the table. And now that Nate Torres, with his amazing "high-loop lay-up," has come into his own, you can be sure that Johnan will play a tougher game in the second half as well.