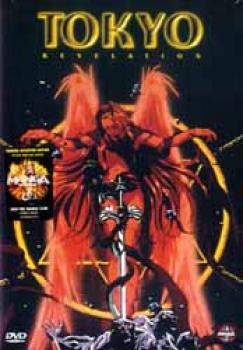 A satanic program is activated aboard a crowded commercial flight headed for Tokyo. It releases a swarm if invisible demons that sends the aircraft plunging to a fiary doom. Everyone aboard is killed instantly - except Akito Kobayashi - owner of the devilish program and sworn ally of hell itself!

kojiro Soma, an old elementary school friend of Akito's, is surprised to see him enroll back in school. Kojiro notices how this once lonely boy has grown into a suave and arrogant teenager. Later, when his classmates are attacked and legendary demons return to stalk the streets of Tokyo, kojiro begins to truly understand what his old friends has become.

Akito has plans for the human race. The plans revolve around magnetite, the mysterious element that forms the living essence of every human soul. Combined with his demonic software, a strong enough source of magnetite would release a plague of devils upon the earth. that source exists in kojiro's class, but when the evil plan expands beyond even Akito's grasp, it is kojiro who must find the ultimate power within himself, and go head-to-head with the greatest demon of all!

Demonic possession and computer technology unite in this action-acked occult anime thriller from director Osamu Yamazaki (Wrath of the Ninja).