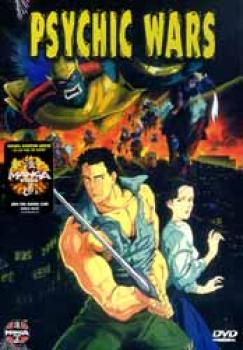 One man's desperate race to save the Earth from ancient demons!

Brilliant surgeon Ukyo Retsu performs an operation to remove a cancer from a mysterious old woman. The "cancer" turns out to be a 5000 year old demon, a dark messenger from Japan's ancient past heralding a demonic invasion of the Earth.

Ukyo travels to the remains of an ancient city where he finds a gateway in the fabric of time which enables him to travel back 5000 years. There in Earth's past, he discovers a race of demons who are planning to use the gateway to travel to the present in order to destroy mankind and to make the Earth their own.

Can Ukyo defeat the ancient race of demons and save the Earth, or will mankind be wiped out forever?

Psychic Wars is an intense and chilling anime thriller, directed by Tetsuo Imazawa, based on an adaption of Yasuaki Kadota's popular Sc-Fi novel.