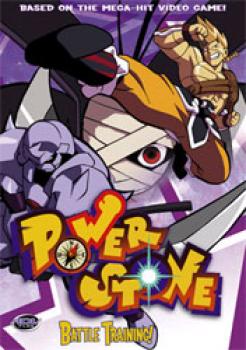 Falcon finds himself in serious girl trouble with the beautiful Cassie. But is she after Falcon's heart, or his power stone? Then, when Falcon's father sends him another stone with a surprising power, it leads to an exciting battle with the warrior Wang Tang. Falcon then sets off for the mysterious Mt. Min-min to steal a magical eagle's egg. And, just wait until the unsuspecting heroes meet up with a giant black octopus and the metal-clawed, skeleton-faced pirate, Kraken! Approximate running time: 100 minutes.

I would've enjoyed this a lot more if the original opening theme wasn't replaced with a cheesy sounding opening that made the series seem like it's intended audience was for small children. On top of that, the voice acting wasn't very good. I was really hoping that ADV had decided to release this on an uncut DVD with Japanese w/English subtitles as an option, but we get stuck with the dub. There's some really great dubbed series out there, but this just isn't one of them. Bottom line: If you're a Power Stone fan like I am, really enjoyed the games, and would like some more back story on the characters, you'll get some amusement out of this. If not, I'd steer clear.