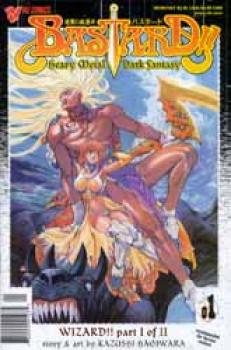 Other items in Bastard!! comic US

The favorite RPG and heavy metal-influenced manga comes to America! The kingdom of Metallicana is under attack by four evil armies and the desperate defenders must turn to a legend that a virgin&#39;s kiss may awaken "Dark Schneider," an ancient evil wizard sealed within the body of Lucien, a seemingly normal 14-year-old boy. Yoko, Lucien&#39;s teenage stepsister, does the deed and as the castle falls, Lucien metamorphoses into a silver-haired demigod! Dark Schneider, the chaotic, lecherous wizard, has returned, only barely restrained by the magic that forces him to obey Yoko! But a world of demons, dragons, and the four evil generals awaits him¿and bloodstained Metallicana may never know peace again!