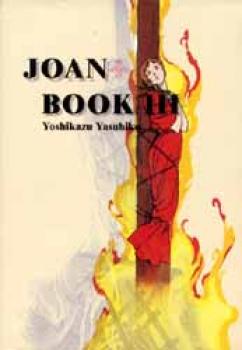 An entire country's future and humanity are at stake. The final chapter of Joan pits Emil against her for Dauphi one final time. Will Emil's fate be the same as Joan of Arc's - - a fiery execution? Or will divine forces intervene to save the heroine's life and preserve the long-deserved unity of France?

I've picked up the three volumes of Joan from the shady corners of a discount book outlet about a month ago, simply because they were too cheap to pass up. Turns out Joan is a solid, interesting manga that deserves better than to linger in bargain bin limbo. The third volume is definitely the strongest of the lot, and brings a fitting climax to the story.

Despite what the cover may suggest, Joan is not a story about the actual Jeanne D'arc. This story takes place after Jeanne's campaign, when all was still far from well in France. We follow the exploits of young Emil de Beaudricourt, born Emily. Just like Jeanne before her, Emil dons men's clothes to fight alongside the king of France's forces. Visions of Jeanne, and a deep admiration for her fuel Emil's drive to finish the task that Jeanne started. In this third volume, Emil finally gets to lead troops in actual battle, thus coming very close to her ideal of following in Jeanne's footsteps. But war is an ugly thing, and the battles are full of casualties. Emil's darkest hour comes when she is captured by the Dauphin Louis, the most fervent opponent to the king's reign and Emil's sworn enemy.

I won't reveal how it ends, but let's just say that the ride was worth it. Joan is a tight, intense bit of historic fiction with excellent, full-colour art. Yoshikazu Yasuhiko is best known for his character design work on the classic Gundam series (indeed, it sometimes looks like a bit of Ray Amuro's genes have landed in medieval France with Joan) but Joan is a different beast altogether. The art is more similiar to something from a French or Belgian comic than your usual maga art. Yasuhiko has clearly done his homework for this story. The castles of the Loire region are vividly evoked with just some delicate watercolour art. I've been to the Loire region several times, and Yasuhiko's renditions of places like Amboise or Tours were instantly recogniseable. His art is often fine and delicate, with a soft watercolour look to it. Most pages are dominated by a single colour to enhance atmosphere. His characters look distinct and expressive, and he renders medieval architecture with great style.

If you like historic fiction, Joan is very much worth checking out for the spot-on look and feel of old France alone (and if you can't get enough history, Comics One helpfully provides lots of background info in this edition). Besides simple eye candy, Joan also delivers a gripping story which will appeal to more than just history-junkies. Joan is the sort of title which proves that tasteful, intelligent manga can be found among the droves of superpowered schoolboy stories. That you can get these simply beautiful books at a very friendly price if you hunt around a bit is very nice indeed, but Joan is easily good enough to warrant the full asking price.