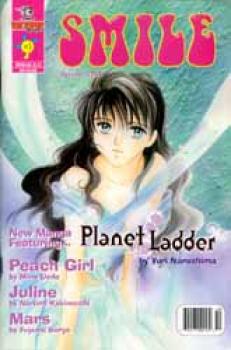 The critically-acclaimed Smile is the first all-shoujo anthology in America. This month marks the debut of two new series: Mars (a high school drama, in the tradition of Peach Girl, only much grittier), and Planet Ladder (a magical girl story in the tradition of Sailor Moon). There&#39;s something for everyone in the new Smile! Mars-Can two teenagers struggling to deal with adolescence find true love? Kira, a shy high school student, lives only for her art. Rei is a boy who wears his reputation for being a delinquent like a badge of honor. When Kira sees Rei kissing a statue of Mars, it leads her to overcome her fears and ask him to model for her. As the two slowly get to know one another, they discover that they are closer than they could have ever imagined. Find out how tough high school can really be! Planet Ladder-Kaguya just wants to live an ordinary teenage life. Orphaned at the age of four, she was adopted by the Haruyamas, a family that she thought was perfectly ordinary, until now. Now her foster dad is involved in a major bank scandal, the family is receiving threats, and her mom&#39;s tarot carts read an ominous fortune for Kaguya. If only she could just get away from this crazy world! When a mysterious prince calls her cell phone, she just may get her wish. Peach Girl (by Miwa Ueda)-Are Kiley and Momo finally going to get together? It certainly seems that way now that Momo and Toji refuse to talk to each other. Kiley&#39;s been chasing Momo for ages, but now that his chance is finally here, will he get the girl of his dreams, or will his conscience get the better of him? Juline (by Narumi Kakinouchi)-Tensions mount at the Black Pearl Tournament when the noble Bakuya must battle the twisted shadow of her missing fiancée. Can she win back the heart of her former lover, or is he lost to the dark side forever?