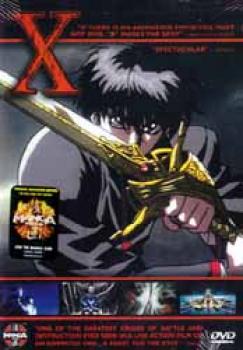 Kamui Shirou, a man mysteriously endowed with psychic powers of great magnitude, returns from 6-years of self-imposed exile, heralding the salvation of humanity, or its utter annihilation. A harbinger of hope, or desolation, and caught between two opposing factions seeking to gain his favor in the brewing confrontation; the Dragons of Earth, which seek to purify earth by unleashing the seven angels of heaven and the onset of Armageddon, thus cleansing it of mankind&#39;s destructive presence...or the Dragons of Heaven, which covet the sanctity of humanity, and defy the threat of total extinction...he alone must stem the tides of fate. Approximate running time: 96 minutes.

Sadly, no amount of lovely art or striking visuals can save the train wreck that is X: the movie. For fans of the manga, it's diheartening to see how poorly the source material gets treated in the movie. For the non-initiated, the movie is basically incomprehensible, and very hard to care about. No matter what your background knowledge of the X universe is, the movie just isn't very good.

There are two main problems that plague the movie. First, the heart and soul has been sucked out of every single character. With a runtime of a mere 90 minutes or so, every little subplot from the manga had to get axed. None of the Dragons are developed in any way. The whole lot of them comes off as either mindless brutes or plain cardboard cut-outs. It's hard to really fault the movie for this, since the manga was still in its early stages during the production if the moive. Few of the characters had really begun to develop back then. It still makes the movie dull and frustrating as all hell, though. And if you do know the softer side of all these characters from reading the manga, you'll downright hate their soulless psycho acts from the movie. What we're left with is a 'battle movie', as director Rintaro puts it. Or really a string of mindless drones who kill each other off because of some barely coherent apocalyptic mumbo-jumbo.

That's where the movie's second big flaw kicks in: the plot just isn't explained in a satisfying fashion. The whole shebang about the upcoming apocalypse, the 'twin star' of Kamui and the 'kekkai' around Tokyo (referred to as shields in both the dub and the subtitles, or by the infantile term 'power shield') is established very poorly through a handful of flashback and dream scenes that don't make a whole lot of sense. It leaves the story devoid of any emotional impact for the average viewer. In fact, there's hardly anything in X: the movie that manages to be gripping. The movie fails to breathe some emotional spark of life into damn near everything. The bond between Kamui, Fuuma and Kotori is probably supposed to be the focus of the movie. However, it's handled in such an offhand, lifeless fashion that it just leaves one cold. The few cursory mentions of the friendship between these three don't do anything to make you care. And that sums up the whole movie's blight. Lots of stuff happens that really wants to be poignant, but there's nothing in the movie to make you care about what's going on.

This DVD edition is quite a nice job. There's a small handful of extras, none of which are really fascinating (a gallery of stills from the film and a textual transcript of an interview with Rintaro that doesn't give all that many insights into X: the movie). Picture and audio quality were just fine. And with the movie's heavy reliance on dark scenes and heavy blacks, pin-sharp video quality really helps. I'm not enamoured with the subtitle track, though. It looks enormously silly when subtitles spell out things like 'Ugh!' and 'Arrrgh!', or when the subs feel they need to spell out 'Telephathy' when someone speaks through... telepahty. Y'know, in case we didn't get it, what with the telepath's echoing voice and lack of lip movements. Also note that both the subtitles and the English dub get the name 'Sumeragi' wrong. Subaru Sumeragi and Seishiro have little more than two minutes worth of screen time, so they really have no impact on the story at all. But mistaking the name 'Sumeragi' for 'Kimeragi' is still a big slip-up, and one that ought to piss off a lot of CLAMP fans.

And the dub... oh lord, the dub. It feels like we're back to an early nineties Manga Video dub with this howler. The script is replete with dumb, pompous lines, dopey voices are rife (Kotori sounds like she's on frickin' helium) and none of the dub actors could pronounce the Japanese character names properly if their lives depended on it. There's even that dreadful habit of adding dumb dialogue over scenes that were silent in the original version. Avoid the dub unless you want some cheap chuckles. The Japanese audio track at least features some decent voice talent. Toshihiko Seki lends some spice to the otherwise completely flat Shogo Asagi (a stand-in for Kakyou, who isn't in the movie at all). In fact, there are some little tidbits of information that the dub doesn't mention. They don't remedy the film's hollow and nonsensical nature, but it's nice to be in the know.

Upon reflection, I find myself mellowing to X: the movie's problems. I don't nearly hate is as much as I did when I first viewed the whole thing on dubbed rental VHS (a Japanese audio track certainly helps). It does succeed in creating a mood of oppressive gloom, but oppressive gloom and nothing else isn't really that interesting. It might just be possible for a longtime X fan to enjoy this is as a sort of brainless feature-length videoclip of their favorite characters doing typically X things against a backdrop of typically X images (unless you're a Kakyou fan, in which case you're just plain screwed). That doesn't change my opinion that this is a deeply flawed movie, however. The manga version of X is a splendid, suspenseful affair full of engaging characters, and it could have made for a much better movie, had it been handled competently. This mindless, bloody romp that tries to explain itself away with some pompous vague dialogue is not my idea of X, and not my idea of good cinematic entertainment. Stay well away from the movie and try the manga and TV series instead.

I totally love this movie!!!!

I've never seen the TV show before and it's apparently more elaborate storywise but if the show is any better than this movie OMG....

It's no use to explain the content of the story when you can read it above but let me tell you maybe to some it can seem done and old but the visualisation of it is absolutely wonderfull.

It is really interesting to see how each side tries to enlist Kamui on their own side and it's also interesting to see the relationship between Kamui's childhood friends whom which one of them will play a mayor role involving Kamui's fate but of course you have to see for yourself.

I also liked how they developed the characters. Every dragon is beautifully drawn and has an interesting personality. And the fights are kewl too. The barriers that surround the area where they'll fight and what happens to them if they loose is also kewl to see.

I liked this one also dubbed in English for a change. Kamui's English voice resembles alot like the Japanese one. The dubbing isn't a perfect 10 as always but it's done better than most other dubbed anime.

Picture and sound quality are perfect! The music and sound effects blast like they should do when you turn open your speakers.

Although I haven't seen the tv episodes this movie has inspired me to do so!

I highly recommend this one to any anime fan alike!