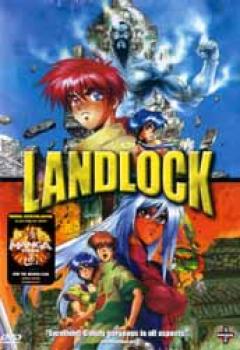 On a fiery stage illuminated with blood and tragedy...
An epic tale is about to unfold!

Mysticism and technology unite in this great 2-part anime series featuring character designs by Masamune Shirow (Ghost in the shell).

The land of Zer'lue is in turmoil, ravaged by the technological might of Chairman Sana'ku and his evil, militaristic Zul'earth forces. In a rapidly unfolding story of treachery, deceit and betrayal, only one boy holds the power to defeat such overwhelming odds... a boy named Lue'der, who possesses a mysterious red eye and the ability to control the power of the wind itself. With the fate of the world at stake, Lue'der must learn to unlock his legendary power and battle against the evil which threatens to engulf his planet.

This action-packed sci-fi sorcery series features strong visual design, vibrant colors and wonderfully exotic characters. Landlock takes you into another world that blends a stirring mix of magic and technology with loads of animated action and adventure. manga Entertainment presents this magical 2-part tale on one DVD.