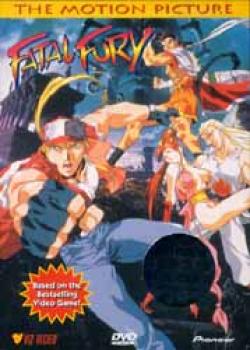 According to legend, the person who collects all six pieces of the mysterious "Armor of Mars" will become heir to the timeless, all-powerful techniques rumored to be at the base of all the world's martial arts schools, techniques upon which both Master Tung and Wolfgang Krauser's techniques are based. Laocorn Gaudeamus, arrogant young descendant of the armor's original owner, has scoured archaeological sites around the world, to recover half of the mystical armor. Can anything stand in his way? Based on the best-selling martial arts video game for the NeoGeo, Super Nintendo, PlayStation, and Sega game systems, Fatal Fury is one of the most successful video game to animated video adaptations ever, thanks to gorgeously animated fight scenes, a gripping story, and unforgettable characters. Approximate running time: 100min. Recommended for ages 16 and up. 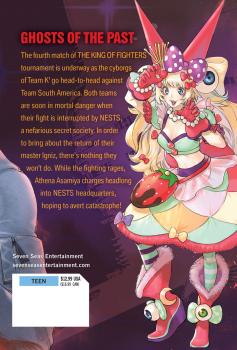 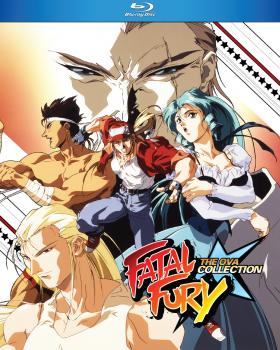 Fatal Fury: the motion picture is a fun adventure romp that doesn't tax the viewer's brain a whole lot. Thankfully, it also doesn't insult the viewer's intelligence a whole lot, despite reveling in (sometimes unintentionally) silly moments and anime staples. It's a very suitable bit of light-hearted distraction for those not expecting a philosophical opus.

At heart, the movie is a globetrotting, artifact-hunting adventure &agrave; la Indiana Jones, peppered with some glowing fireball-infused fisticuffs. Realistic martial arts action this ain't. The frequent duels throughout the film are fought accoridng to the long-established anime rule of shouting your super-duper special move's name to conjure up a whopping big energy blast, with extra speed stripes. Yup, that would be one of the movie's sillier aspects. For every second punch that gets thrown, a funky attack name needs to be shouted. Which starts to look silly after a while, even if you've played the game and know all the attack names.
The silliness factor is further cranked up by a truckload of firmly established anime visual clich&eacute;s. And I don't just mean speed stripes. Everything, including a henshin sequence is in there (when some bloke prepares to kick arse, his suit and tie magically shred away to be replaced by a white kimono - just because).

But the silliness of Fatal Fury: the motion picture is actually endearing rather than annoying. It can work wonders as popcorn fun if you've seen a fair amount of anime and are prepared not to take this seriously. You know there is no reason at all for a magical, completely unexplained suit-to-kimono henshin, except that it's supposed to look cool. Embrace the silly elements of the film as such, and it's quite good fun (unless you hate any and all well-known anime clich&eacute;s, visual or otherwise, in which case you shouldn't be reading this anyway).

You don't need to have played the game or seen the OAV's that lead up to this movie to follow the (admittedly flimsy) plot. The movie does refer to elements from the preceding OAV's, but doesn't leave viewers in the dark. The plot, such as it is, involves a guy named Laocorn, who wants to collect every piece of an ancient armor that will supposedly grant him the power to dominate the world. Because that's what snarky, suave anime villains with lavender hair do. He has a sister, however, who implores the aid of Terry Bogard and his brawling buddies to put a stop to this diabolical plot. Because that's what semi-psychic anime girls with blue hair and evil brothers do. So they set off on a journey to track down the pieces of armor and beat up Laocorn's nasty henchmen, because that's what... well, you get the idea. Throw in varied locales, funky-haired evil henchmen with elemental powers, a sprinkling of mythical/historical references and loads of action. Slick, fast, well-directed action, I might add. Despite the silliness of it all, the action in the movie is directed with enough flair to make it look cool.

The plot sometimes veers from gently goofy into plain dumb. The good guys often resort to pure guesswork and dumb luck to figure out what to do next, for instance. The art and animation, while generally quite pretty, sometimes betray their rather low-key nature. There's a scene early in the movie where the detail and coloring take a sudden, drastic step backwards to allow for a lot of frames of Terry beating up some black-clad, masked, eeeh-vil henchmen (just another clich&eacute; for the masses). So it is neither high art, nor visually gorgeous, but neither is it noticeably bad in any area. It's just plain, unpretentious fun, and should be enjoyed as such. It may not be entirely worth the asking price, unless you're a big fan of either typical anime action or Masami Obari's distictively sharp art style. But as a rental, or an occasional watch, it pushes all the right buttons for the average anime fan. Which is a whole lot more than can be said for most fighting game-to-anime tie-ins, even if there are needless little cameos by other characters from the game in there.

Then see how Terry and his friends come to life in a beautifully drawn anime movie!

If I'm not mistaken this is the third movie, don't shoot me if I'm wrong because you can't {:-p, Here we follow Terry and his friends to Greece when Terry meets in an arcade a young girl named Sulia. Sulia has a brother who is obsessed by the armor of mars. Why? Of course as any other strong person he wants to be the strongest as simple as that.... There are plenty of fights in here to keep you at the edge of your seat or sofa. But I must say I didn't like the fights in the same I liked them in Street Fighter II: The Animated Movie. That movie had jaw dropping scenes which lingered in my mind long after I saw it and this movie doesn't have these kind of scenes unfortunately. That doesn't mean they're no good but still with this level of artwork they surely could draw better fights but hey who am i?

I don't know for sure when it first came out. I think it was 1995 or '94. But despite it's almost ten years old you can hardly tell. This movie can easily measure up to the newer movies. The colours are very full and lively and the animation is crisp. So definitely no complaints there! The soundtrack howver is kinda dull. There wasn't a single theme or BGM that kept hanging in my head or that got my attention. Too bad....

The story itself is fairly interesting. It's somewhat higher level than the standard martial arts movie because this time it's not about some tournament or some wanering fighter who meets a lot of people. The characters are very loveable. They grip your interest immediatley but that's also thanks to the humor.

Looking back at it I say rent it and watch it once because I don't think this is the kind of movie you'll watch twice in the same year.