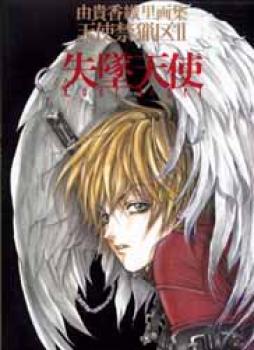 Enter the fantasy world of Kaori Yuki's Lost Angel with this mesmerizing collection of full-color illustrations of angels,devils, and their earthly incarnations. Minimal Japanese text.

Few are those who can leaf through a volume of Angel Sanctuary and remain indifferent to Kaori Yuki's art. The enormously detailed costumes she draws and the incedibly intricate shading she applies to even ordinary manga pages combined with the piercing gazes of her characters make her art something special.

A generous helping of her color illustrations for the long-running Angel Sanctuary manga are collected in this artbook, although there¿s a sizeable amount of black-and-white pages as well. These shouldn¿t be dismissed as a mere afterthought, as the book¿s black-and-white portion features some interesting content as well. Pages 79 to 88 feature a gallery of black-and-white title page illustrations for chapters of the manga, which display her amazing virtuosity with black-and-white shading techniques. With almost fifty of the book¿s total amount of pages (barely a hunderd, tops) being black-and-white, it¿s a relief that these pages were used for some genuinely interesting content rather than just Japanese text. An overview of all the characters and the storyline of the manga as well as some concept sketches in the black-and-white section are a pleasing addition for fans of the series.

The lion¿s share of anyone¿s interest will go to the color pages of this book, though. There are roughly fifty pages worth of color illustations in there, which may seem a little skimpy, but all of the images are very impressive. There¿s lots of detail to scrutinise and a large variety in moods, colors and techniques between the illustrations to keep on surprising the reader. Whether it¿s soft, warm tones, misty dark colors or stark black, Kaori Yuki¿s mastery shines through. It shows how much her style has developed since the early steps of Angel Sanctuary in this book ¿ she has found a look and feel of her own to her art which is more solid and bold than it was in her earlier drawings.
While the quality of the art is impeccable, the content may throw some unsuspecting readers off balance. This is no mere cute and fluffy shojo art. In fact, Angel Sanctuary often veers into the grotesque and downright twisted, and this dark side of the manga is reflected in the color illustrations. An image of a happy, smiling Setsuna reaching out to some fluttering feathers contrasts with one where he poses in tight black leather while a mess of wires grows all around him from a blood-splattered computer. I suppose it could be described as gothic shojo. If you don¿t mind alternating between sweet and disturbing illustrations, sort of like switching between Sailor Moon and The Crow at random intervals, you¿ll be able to appreciate this book.

Angel Sanctuary fans will know what to expect ¿ after all, the gothic look and frightening moments are part of the manga¿s charms, and will probably love a collection of their favorite art in such a nicely made book. Whether it¿s color or black-and-white, the quality of the paper and the printing never dips below crystal-clear. Hakusensha have put their best foot forward and produced a large, glossy and solid artbook with Lost Angel. The care placed in the creation of this book is further emphasised by a few nice touches in its design (the transparent title page with the pink feathers or the slightly embossed writing on the cover flap). Basically, a polished product that does the illustrations contained within justice. It¿s a pleasure to see an artbook done right. If you think the content of this book will appeal to you (either because you¿re an avid Angel Sanctuary reader or because you enjoy gothic and slightly twisted imagery), go for it.