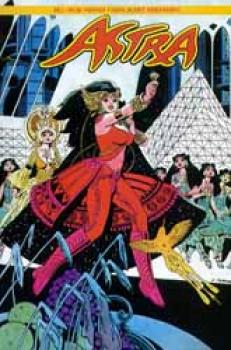 Jerry Robinson, creator of The Joker, collaborator with Bob Kane in the earliest years of the Batman, has created a new comic book series in collaboration with top Japanese creators! Astra is a funny, sexy science fiction story about the beautiful Princess Astra, the heir to the throne of a planet entirely populated by women! When all the men of her planet were killed in an interplanetary war, the people of the planet Eros survived by artificial means. But their supply of precious bodily fluids is nearly gone, and Astra goes to find a man! She meets up with Yosuke, a rough-and-tumble Earthling who wants to sweep her off her feet. But she has been warned by her mother, the Queen, about the wiles of men, and she&#39;s not about to give in! The story is brought to life by Japanese good girl comic artist Shojin Tanaka, creator of Metal Boy and Shibuya Honky Tonk, published in the Weekly Playboy manga anthology. The alternate cover is by Red Sonja artist Frank Thorne!