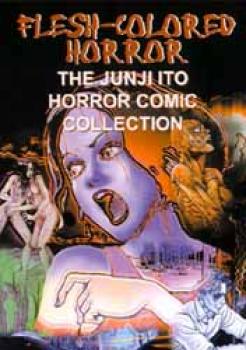 Flesh-Colored Horror is a collection of bone-chilling vignettes, centered on what at first seems like ordinary people Tales of obsession, love, loss, beauty, and the perversities of nature will leave you afraid to turn off your lights before you go to bed!

I'm not familiar with the conventions of horror manga, or with Junji Ito's work in general. This book was a pure grab bag purchase, bought from a bargain bin just because I do enjoy an occasional spooky read. However, the short stories contained in Flesh-Colored Horror are often viscerally gory rather than spooky. It's hard to slowly build up dread in a short number of pages, even more so in a comic. So the stories in Flesh-Colored Horror often just jump to disturbing, grotesque gore to get their scares across. It isn't subtle, but it works on some level - the gore on display is twisted and bizarre enough to give one a distinctly queasy feeling in the gut.

There's a difference between inspiring fear and churning one's stomach. Flesh-Colored Horror leans a bit too much towards the latter for my tastes, but does so with a decent amount of style and inventiveness. This isn't your average, simple slasher movie gore. The sick imagery is sick enough to plague one for quite some time after putting the book down, even if it does come cheaply. Not all stories in the book rely on flat-out gore to work, though. The dark, abandoned art studio in 'Headless Sculptures' drips with atmosphere, and the final, somewhat longer story in the book gets the balance between gross and creepy very right. It's fairly good stuff, overall. Junji Ito can probably work wonders with longer page spans, if these short efforts are anything to go by.

However, some wonky art and a downright awful job on the English-language version keep this book from being a real success. Ito's art style takes some getting used to at first. It makes perfect sense to give characters a down-to-earth, simple look in a horror manga. If everyone looked overly cartoony and squeaky-clean, it just wouldn't work. However, these stories were probably very early works of Ito's (they span from 1988 to 1994). There are moments when you can tell he's still finding his feet. The illusion of motion is often clumsily handled, and the page layout doesn't always work. When the anatomy of the characters sometimes goes off-kilter, and scenes with a lot of movement look downright silly, it's hard to take things seriously any longer (ironically, later stories show Ito masters human anatomy very well). The story titled 'Beehive' suffers especially from this.

What drags the staying power of these stories down a notch further is the lousy translation. Some embarrassing mistakes pop up in the text. &quot;Is Shimada still sleep?&quot;, the protagonist of 'Headless Corpses' wonders at some point. Yes, that's quoted literally. Plus, any comic page that uses the text &quot;walk, walk&quot; as a sound effect is going to look silly. Transcribing sobbing sounds as &quot;ahuh, ahuh&quot; or making liberal use of &quot;step!&quot; and &quot;skitter!&quot; to evoke background noises won't do it any favors either. And would you just -look- at that hideous cover image! Whoever though it was a good idea to fly into a Photoshop frenzy for the cover needs to be locked into a small, dark room for a very long time. It gives the book a cheap, trashy look, where some of Ito's unaltered color art would have made a fine, tasteful cover. With all that, this book is a nice enough bargain bin find, but not one I can really recommend actively seeking out. Fans of the author may find it interesting, but it's just a bit too hit-or-miss to recommend to most readers.

I really like the stories of Junji Ito, they give me goosebumps. I liked all the stories, but one is truely marv.! Some guy makes statues which come to life and try to rip off their heads and things like that. I wouldn't read it if you get scared very fast!