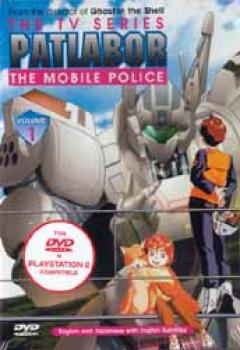 From the director of Ghost in the Shell! As the 20th Century was nearing its end, a new Industrial Revolution brought forth unprecedented advances in robotics. The invention of the Labor--a humanoid-type, multipurpose construction machine--emerged as the wave of the future. Making older industrial equipment virtually obsolete, the Labor also became a terrorist weapon. To combat the rise in Labor crimes, the Tokyo Metropolitan Police Department establishes specially designed Patrol Labors: Patlabors. This volume contains episodes 1-5. Approximate running time: 120 minutes.

Patlabor is truly something special. Thanks to its unique blend of serious, intelligent sci-fi and loveable comedy, Patlabor has enjoyed success in various formats, including OAV's and movies. So far, every incarnation of Patlabor that I've been able to watch has been very enjoyable. Judging by these first few episodes, the popular TV series is no exception.

For a TV series from the early nineties, this still holds up very well in the visual department. Whatever budget was available has been put to good use so that busy scenes or mecha combat could be well animated. Concessions to the budget such as drops in detail and recycled footage remain at a minimal, and easily forgiveable level. This is definitely better than average animation for a long-running TV series.

Patlabor¿s true strength has always been in the plot and story department, however. Fortunately, all the elements of the story click together neatly in the TV series. The comical bits work just as well as the urgent or thought-provoking elements of the story, and the characters really grow on the viewer with their distinctly quirky personalities. Even an underplayed character such as Yamazaki is handled with enough skill to make him very likeable.

So far, the writers behind the TV series have made good use of the 30-minute weekly episode format to deliver some interesting and varied stories. Although there are two very similiar episodes on this disc involving something big and nasty on the loose with only the plucky SV2 division to do something about it, it's hard to fault the series for poor writing. A lot can be done with Patlabor's premise, and it's good to see that this potential isn't going to waste. I especially liked an episode that takes time to examine the whole way of life at SV2's barracks. Instead of piloting robots into battle, it's revealed that the SV2 officers have to spend a lot of time growing their own food (because of the base's remote location, they have to be supply themselves with everything). Apart from a minor internal crisis, very little happens in that particular episode, but the humour and the dedication to fleshing out this fictive world in detail make it a shining example of Patlabor at its best.

If the rest of the series maintains the same standard as the five very entertaining episodes on this disc, we have a winner on our hands. So far, this seems to be an eye-pleasing, entertaining series with some remarkably intelligent touches in its plot. The DVD itself is nicely made, despite a somewhat ugly cover picture. I have no complaints about the picture and audio quality. Extras-wise, this disc is fairly flimsy, but that will hardly bother most viewers. If you don't mind a series with giant robots where the pace occasionally slows down, and where such everyday subjects as cleaning the robots in time to catch your own fish take the upper hand over non-stop action from time to time, there¿s no harm in checking out this series. You may find yourself very pleasantly surprised.