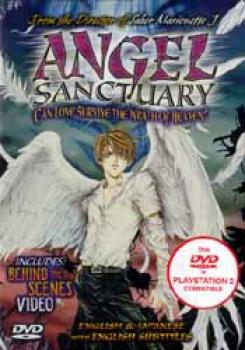 In the apocalyptic tradition of X and Earthian!

A beautiful angel wages war against God - and loses. Reborn as a human boy, Setsuna struggleswith horrific visions and supernatural powers. Angels and demons flock to his awakening, spoiling for battle. Will Setsuna lead them to the apocalypse, or to salvation? Complete series, episodes 1-3.

Angel Sanctuary started life in 1994 as a serialised manga gracing the pages of Hana to Yume magazine. Its complex, twisty story has eventually filled 20 collected volumes. These three OAV's are somewhat more limited in scope, reflecting the events of only the first three volumes or so of the manga.

Unfortunately, quite a lot of elements from the manga had to be axed, trimmed or otherwise shortened and sped up to fit even the early parts of the story in three 30-minute episodes. The result is a bit of a mixed bag. There are moments that genuinely work, moments that will please fans of the manga and, alas, quite a lot of moments that seem forced and contrived. Newcomers who are unfamiliar with the manga -and who'll make up the bulk of viewers for this DVD outside of Asia- will find it very hard to just jump in and follow the story of the OAV's. Some may find the tangle of religious subtext, incest and general weirdness a pleasing oddity, but I can imagine it will just seem trite and silly to most neophyte viewers.

Even though a lot of moments have been lifted straight from the manga and are recreated very faithfully in animation over the course of these OAV's, it often just doesn't work as well here as it did on paper. When Rosiel turns a bunch of teen punks into pulsating, wiry monsters in the manga, it's an intense and gruesome moment. In animation, it ends up looking somewhat silly, with the monsters too squeaky-clean and the generously flowing blood too bright red. Similiarly, a brilliantly touching scene from the manga where Kira comforts Setsuna suffers in the OAV's, where there hasn't been as much prior character development and build-up to really make it work.

A lot of this isn't really the fault of the OAV's being -bad- per se. In fact, the animation staff has done a good job with material that's very hard to properly convert from manga to animation form. But even though it's a brave attempt at making the best of it, even though the art and animation are very polished and eye-pleasing (and do a great job of conveying Kaori Yuki's unique style while still maintaining a look of their own), and even though there are some poignant moments that will touch even un-initiated viewers, such as Kira's plight, it's just not strong enough as a whole to recommend to someone who has not read the manga prior to this. The average viewer will probably end up feeling confused and not very interested in what has just flashed by before his eyes. And an immensely frustrated &quot;to be continued, but not here&quot; kind of ending does little to change that.

As an avid reader of the manga, I did quite enjoy this, despite the aforementioned trite moments and the axing of some beloved plot points and moments of character development (though I really disliked Arachne's lousy design in the OAV's - he looks like a tired hooker on a 1980's flashback with his loud orange hair in a stupid style and garish green raincoat and pink lingerie combo, nothing like the flamboyantly trampy Arachne we know from the manga). In fact, trailers prior to the OAV's release had me incredibly excited. So I suppose fans of the manga will find no harm in at least checking this out as a nice curiosity. It's just a shame that these OAV's won't work very well with any other audience, even if they do try their best.