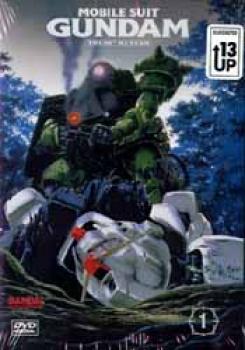 The year is UC 0079, the Federation has begun mass production of the prototype Gundams for use by their ground forces. Shiro Amada, commander of the 08th MS Team must lead his squadron through fierce fighting on the ground. However, the Zeons are developing a secret project which could tip the balance of power! Can Shiro and his ragtag team of cast-offs, rejects, and bad attitudes save the Federation? Approximate running time: 100 minutes.

I think I can say that this is one of the lesser popular shows from the Gundam universe. Maybe because it doesn't feature extremely high-powered-over-the-top designs, space travelling, etc. Instead this show has realism! The story plays entirely on Earth except the first episode but that's only then when they're travelling to Earth. And that's why I like it so much.
The Gundams here are powerfull but they can be destroyed just like any other vehicle or mobile suit. Which also makes more realistic fights and more intense fights because any fight can be over with any right blow.

The first 3 episodes on the DVD tell mainly who the main characters are, what they do, how they react to eachother, we're being introduced to the main mecha and we also get a taste on how the battles will be like. Nothing much or really exciting but just decent story building.

DVD case:
I guess just basic work. The front has a RX-79 laying on the ground which apparently is shot down by a member of Zeon. The back just shows some screenshots and the synopsis.

Extra's:
Various trailers including trailers from Mobile suit Gundam and Gundam 0083. I've never seen the original and seeing that trailer made me quite curious actually. Eventhough it's old it still definitely has it's charmes.
It also has clip from The 80th MS team. It's mentioned as extra footage but it's nothing really special

Picture quality:
Really sharp! I was expecting something &aacute; la Berserk with alot and alot of grain and fuzzy quality. Thank god it isn't the case. However sometimes there are some noticeable compression erros and little black spots that appear out of nowhere but never in the degree of getting irritating.

Sound:
Can't say much here without starting to blabber nonsense. I forgot if it has 5.1 sound or just regular 2.0 and yes I'm too damn lazy to go see. All I can say is that I really enjoyed listening to the sound track of the episodes. They're clear, crisp, loud and there's nothing more that you need!

This first DVD begs for more to be seen because I've seen a Music Video about this show which is the main reason why I want this entire serie on DVD and I saw that you can expect some very kewl realsitic, battles. I'm also very interested in seeing on how the relationships between the characters will turn out. So plz Archonia get those other DVD's back in stock!