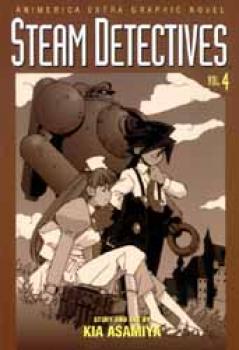 In this volume, up-and-coming defense lawyer Liza Fleisher is in danger when she successfully defends a corrupt Steam City business man and becomes the target of a vigilante serial murderer, Don Death! Now, as Liza&#39;s bodyguard, Narutaki must uncover the secret to Don Death&#39;s identity before he can strike the fatal blow...and the woman he&#39;s guarding may have the answer. Then, Narutaki&#39;s archrival, Boy Criminal Le Bread, shows up at the detective agency apparently having survived their earlier encounter! He&#39;s hatched a new plan to destroy the city and gives Narutaki a list of clues so he may diffuse his plan. Does the boy criminal really want to destroy Steam City, or is he manipulating Narutaki for other goals?