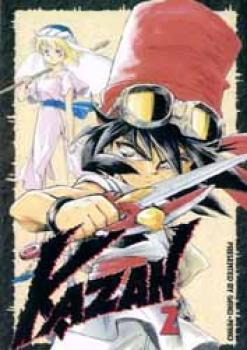 Other items in Kazan manga US

The intrepid Kazan, Fawna, and Arbey continue their journey across the desert towards the mystical land of Goldene. One of their first stops is at a beautiful oasis, whose life-giving beauty hides a monstrous secret. Here, Fawna displays for the first time the destructive potential of her water powers. More fragments of Fawna&#39;s past are revealed when the group is captured by the solders at one of Goldene&#39;s outlying communication towers. Unfortunately, before Fawna can learn what truly awaits her in Goldene, an elite assassin attacks the tower. The assassin succeeds in killing the entire regiment of soldiers before he is finally stopped by Kazan. And, Kazan learns that he may not be the only survivor of the Red Sand tribe. And the other surviving clansman is the very person whom he least expected to find.