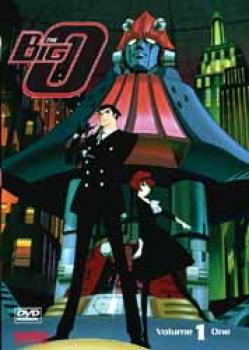 A mysterious occurrence known only as &quotThe Event&quot has caused the residents of Paradigm City to lose their memories. Paradigm City, the &quotcity of lost memories&quot, has recovered, but now falls under martial law, its citizens forever questioning what happened to them so long ago. Sworn to protect Paradigm City, his allies, and himself, Roger Smith, a self-styled &quotNegotiator&quot, along with his machine, the Big-O, seeks to unravel this mystery that haunts him like a faded memory. Approximate running time 100-Minutes.

The first time I heard of this anime was during the Anime 2002 in Holland and I'm glad I chose to check out the preview episodes of this anime during this con. I've always been a sucker for giant heavyweighted mecha who, unlike the mecha of Gundam Wing, seem fragile and bursting with power at the same time (Gaint Robo anyone?).
The main story itself is quite simple but not predictable,
leaving room for different subplots each episode. The anime has an air of style and atmosphere also present in the New Adventures of Batman cartoon; Some aspects are quite similiar, especially if we compare Roger Smith and Bruce Wayne. Also, the way things are animated is very neat and clean.

This DVD contains four episodes instead of the usual three. The action is not rushed but rather normal paced. Although the first two episodes are connected (introduction of Dorothy, the second main character), most of the later episodes can serve as stand-alones. Each episode revolves usually around the idea that a person regains some memory of the past, which is frequently put to use in a not so very good manner. Of course, sometimes old enemies re-appear
and each episode deepens the relation between the two main characters more and more (in a very slow manner), which is another thing I've fallen for in this anime; The relationship between Dorothy and Roger is a source for very subtle humour.

The DVD extra's are there but not really something worthwhile: A sketch gallery, trailers and interviews, which are not my cup of tea. The quality of the DVD is very good though. Maybe I'm not used to watching DVD's but the colors are great.

I've enjoyed watching this DVD and although it's of course not as deep as Princess Mononoke or as compelling as Gaint Robo, I still recommend this DVD. There's a lot more to say about this DVD but I'll leave that to professional reviewers.