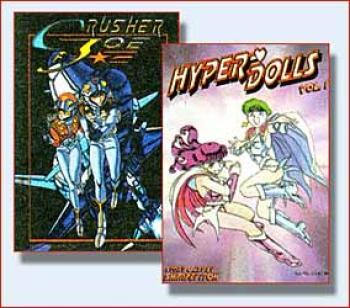 This is a special fan appreciation sale on Ironcat&#39;s pair of sci-fi adventure graphic novels, Crusher Joe - by Fujihiko Hosono and Haruka Takachiho - and Hyper Dolls by Shimpei Itoh, the creator of Moldiver. Join Joe and his valiant crew as they chase after a a mysterious ghost ship and battle for their lives in outer space against galactic intrigue. Then, laugh along with other Japanese monster movie fans at an unlikely pair of robotic super-heroes, Miyu and Malika, sent to pose as innocent school girls while they protect Earth from genetically-engineered monsters.