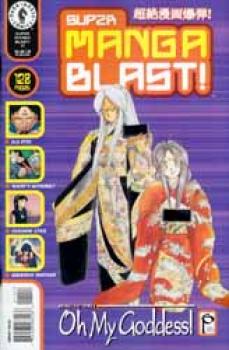 America&#39;s favorite massive manga series continues! In the Oh My Goddess! cover story, Sayoko is still seething over losing her mantle as &quotcampus queen&quot to the innocent Belldandy. Sayoko is desperate enough for attention that she&#39;ll even enter the Auto Club beauty contest! The mystical action in 3x3 Eyes continues, as Yakumo struggles to jog Pai&#39;s lost memory and keep both of them alive as they try to escape from the deadly Marionettes of the Puppeteer&#39;s mansion! Feline hijinks abound in What&#39;s Michael? as Mari gets an adorable, attention-grabbing kitten, and her jealous boyfriend will try anything to scare it off! And in Shadow Star, a group of Dragon Child owners meet to discuss how to reshape the world¿in their own images, while in Seraphic Feather, Attim M-Zak must fight for her life against Rix and his army of anti-personnel warfare robots, using her speed and sword-fighting skills to ward off a legion of machines! It&#39;s five stories for under five bucks!