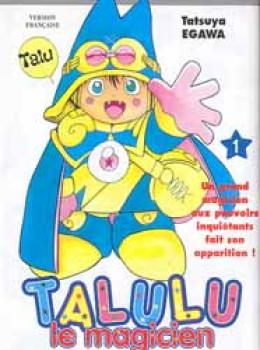 Honmaru Edojo is smitten by new student Iyona Kawai, but is constantly bullied by Jabao Jaba. Then, quite by accident, he summons the magician Talulu (Taruruuto-kun), a little kid with a strange hat and a taste for mischief. Even though Talulu's not that good a magician yet, he decides to help Honmaru get strong and beat up the bullies. Of course, he usually ends up doing more harm than good.

While a fairly light read (directed toward children, unlike Egawa's other series), and a bit repetitious, it's still enjoyable enough. For once, none of the characters are especially annoying; in particular, the terminally nice Iyona is *not* terminally stupid. One word of advice/warning: while a children's series, it does features a lot of typical &quot;improper&quot; Egawa humor.

The Tonkam edition is well-done, by and large. It does seem to be directed toward the younger crowd as well, though - e.g., all the wacky names of the magical items are redone in (wacky) French.