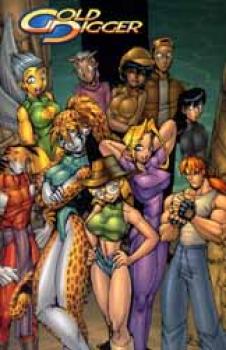 Antarctic Press is proud to present the biggest volume of collected Gold Digger issues ever! A must for any Gold Digger fan, this edition collects issues #1-25 of the original Gold Digger series! That&#39;s 600 pages of material - the equivalent of eight regular trade paperbacks! See the antics of Gina, Cheetah, and Brianna from the beginning, and see them grow into the characters they&#39;ve become today. The print run on this title is extremely limited, and many of the issues included are very scarce, so don&#39;t miss out on this monster volume! Also available signed by Fred Perry!

An archaeologist from the same mould as Lara Croft, her half human half cheetah Lycanthrope sister, Middle Eastern Terrorists, a shape shifting mystical creature, an Ancient Evil, lava pits &amp; a car chase, and that's only the first few pages. And even so the pace doesn't slow down much after that. This kinda action coupled with some of the best situational humour I've read in a comic(Excel Saga included) makes this a great way to pass time on the bus.