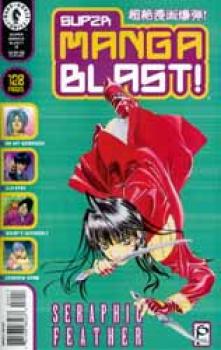 America&#39;s favorite manga superseries delivers another massive, 128-page issue, with a Seraphic Feather cover that&#39;s sure to get your blood pumping! In Seraphic Feather, M-Zak pits her scientifically modified body and deadly sword against her nemesis, Rix Hayward. Rix has superpowers of his own¿but he just may need to call for reinforcements this time! And trouble is brewing at the beach in Oh My Goddess! The Nekomi Tech Motor Club takes a summer outing to the same beachfront hotel as Sayoko and her Art Club cronies, and Belldandy&#39;s powers mysteriously switch off! It&#39;s, creating a swimsuit heaven on Earth! The mysteries deepen in 3x3 Eyes, as a determined Yakumo tries to jog an amnesiac Pai&#39;s memory, while saving her from strange marionette assassins! What&#39;s Michael? continues to have us rolling with laughter as a confused guard dog gets in trouble for acting like a cat! And the tension escalates in Shadow Star, as Shiina and Akira, with their &quotstar creatures,&quot face off against a murderous, mysterious boy and his deadly, flying dragon.