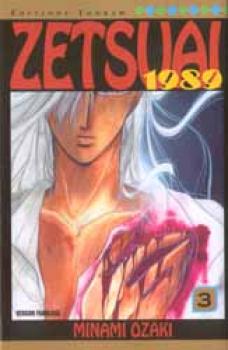 Other items in Zetsuai manga FR

Zetsuai has a reputation of cranking up the angst to extreme levels. I find that rather exaggerated. Yes, the manga is basically all about violent emotions that shake the protagonists, but three volumes into the story, I find that it actually works quite well. In this volume, Koji Nanjo's turmoil takes center stage. He repeatedly resolves to repress his feelings for Izumi, but finds that he simply can't do it. In fact, his longing for Izumi keeps coming back to him, growing more feverish every time he tries to shake it off. I found this aspect of the manga particularly compelling. Maybe it's because, in three volumes time, I've grown used to Minami Ozaki's art style and blend of drama. Once you reach a certain suspension of disbelief, Zetsuai is quite enjoyable. However, there is a catch with volume three. The last sixty pages of this volume, give or take a few, contain a completely unrelated standalone story called 'Miroku'. I found this story tepid at best and regret that it took such a large chunk out of the book. I would've much rather spent those last sixty pages reading about Nanjo and Izumi. Still, flaws aside, this manga is quite enjoyable so far, providing you can get into the story.