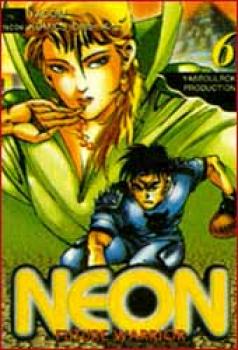 Just one more game to go! The final 100th winning game! Lionheart (Neon) could be freed from slavery and become the first slave ever to win royalty citizenship status. However, the evil Lord Rudolph challenges Lionheart with his super-human power! Learning this plot, Princess Yona begs Lionheart not to continue the game, but Lionheart ignores her pleas. He only wants to win the game so that he can then marry the Princess, since he would be eligible as royalty. In the bloody Powerball game, Lionheart's life becomes threatened, and his undiscovered ESP power helps him to win the game and receive a title as a duke! But Lionheart's title is soon taken away, and he is trapped in the elaborate scheme of Lord Rudolph, claiming that he was part of the anti-government Freemen group. Ironically, Princess Yona rescues Lionheart with help from the Freemen group. Meanwhile, one of Cyborgs attacks NASA as the memory extractor is still probing Neon, and NASA Agent Carlos is killed. Now, the Cyborgs, in disguise, are attempting to contact Suzie.