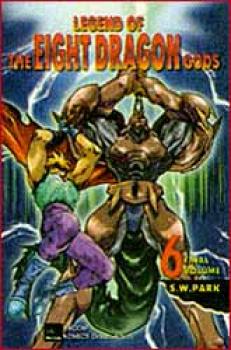 Asura awakens all the evil monsters in both worlds to assert his reincarnation and the dragon warriors' efforts are useless before the flood of monsters! Triumphantly, Joorah returns and kills the monsters with his combined strength from the mountain dragon god warrior and saves the dragon warriors for now. Ultimately, the dragon warriors must challenge Asura and defy his plot to rule the world with evil. In preparation for this battle, Blue uses all her magic to prepare Dragon Leather Armor for Jin-ma to withstand Asura's deadly attacks. But they both learn that the only way to defeat Asura is to combine all eight dragon god warriors' power as one! In this final chapter of Legend of the Eight Dragon Gods, Jin-ma learns of the truth about his forgotten parents and is torn between loyalty for his Master Cadmus and his duty as the savior of the world.