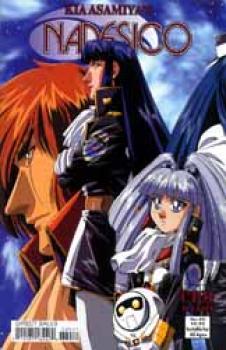 Everyone on the Nadesico is a big fan of the anime series Captain Government, Space Wanderer. (Any similarity to Captain Harlock is strictly intentional!) Who wouldn't love the space adventures of this knight-errant of the solar system, and his fabulous ship, the Space Vagrant? But imagine Akito Tenkawa's surprise when Captain Government pays him a visit on the Nadesico! How could this fictional character suddenly appear in his room? Akito and fan-favorite Ruri Hoshino find out when they realize that Captain Government actually exists in a parallel universe, and has crossed over into the future world of the Nadesico!