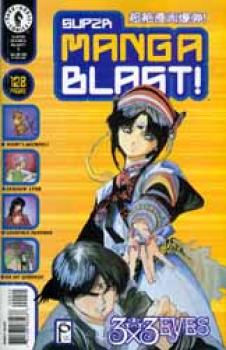 The latest episode of 3x3 Eyes finds a terrified Pai trapped in a dance hall filled with demon marionettes! Will this weirdness jolt her out of her amnesia? The fun in What&#39;s Michael? continues, as Michael again faces the horror of &quotThe Guests Who Wouldn&#39;t Leave&quot and shows us his dancing skills in &quotThe Ribbon.&quot Enjoy a pulse-pounding segment of Shadow Star, with Shiina risking her life by confronting the murderer who&#39;s been terrorizing her friend Akira but with his flying dragon&#39;s help, he has his own deadly plan for her! Plus, mysteries abound in Seraphic Feather, over the powerful Emblem Seeds and the awesome abilities of the beautiful M-Zak, the Scarlet Angel, armed U.N. investigator! And in another &quotlost&quot episode of fan-favorite Oh My Goddess!, a rival motorcycle club has challenged the Nekomi Tech Motorcycle Club to a race but the prize is the goddess Belldandy! Will the Nekomi Tech boys score enough wins to keep Belldandy as their mascot, or will the overconfident &quotSnapping Turtle&quot Etsushi get to take her away to his club? Also check out Oh My Goddess! in its own monthly series!And look for 3x3 Eyes, Oh My Goddess!, and What&#39;s Michael? in trade-paperback collections!