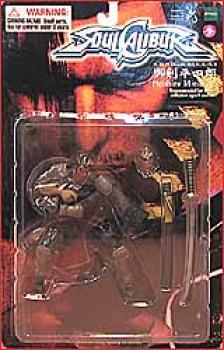 Soul Calibur is the video game sequel to Soul Edge, and is not only an arcade hit, but one of the best-selling titles for Sega's Dreamcast console! It features powerful warriors battling for possession of powerful spirit swords. Even as Soul Calibur the game was a leap forward in video game technology, so too are the Soul Calibur action figures. Each figure features an average of six points of articulation, as well as wepoans and accessories. This series may include: Nightmare (articulated at the shoulders, elbows, left wrist, and waist), with a sword accessory; Xianghua (articulated at the neck, shoulders, and waist) with 2 swords; and Mitsurugi (articulated at the neck, waist, shoulders, wrists, and knees) and a sword. Blister card packaging.