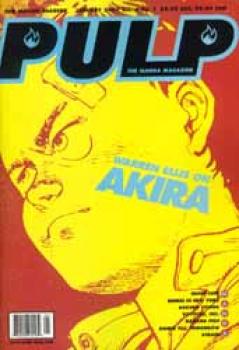 The only truly adult-oriented manga magazine in America, Pulp has 184 pages of sexy, tough, surreal, violent, hilarious manga, plus columns and features written by some of the premiere experts in Japanese pop culture, and the people who brought you Japan Edge and Secret Comics Japan. Movies, books, manga, true crime and more, it's all in every issue of Pulp! Benkei in New York: Murder, suicide, mafia, drugs¿all centered around a woman named Sophie Gibson. Bakune Young: How many Japanese gangsters can hang onto a rope dangling from a helicopter, 100 feet above the ground? Not that many, and it doesn't help with Bakune egging them, or the police about to bust in and shoot everybody! Dance Till Tomorrow: Miyuki and Tachimi have settled Suekichi's affairs to their own satisfaction¿ she plans to marry Suekichi, and Tachimi wants Aya! Strain: Shimei's last rampage has come back to haunt him¿ Banana Fish: Papa Dino uses Shorter as his guinea pig for "Banana Fish," while Yut-Lung tries to turn Eiji into Dino's sex slave. Voyeurs, Inc.: Armed with a camera and a bag of roaches, the stalker tries to force the elevator girl into an impromptu sex video. Plus the infamously bizarre humor manga Short Cuts and Heartbroken Angels.