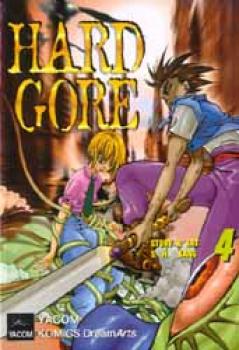 Born of a wizard, Caine continues to kill stalkers to become a Guardian Master, the ultimate wizard. After killing the stalker, Venom, Caine finds his sister, Yoo-mi, with a stalker who was the only friend she could talk to in this horrific world. Instinctively, Caine attacks Dogart, the stalker, who refuses to fight with Caine because of Yoo-mi. But Caine continues to attack until he finally triggers Dogart's anger and he transforms into the true form of a stalker for a kill! As he fights Dogart, Caine recaptures horrible memories of his father Duke, and how he died by Caine himself. The son chosen to become the ultimate Guardian Master of all wizards, the title Duke wanted so badly! He remembers when Duke was told from a dying stalker that Duke may be strong but that he was not chosen to become the Guardian Master. He was only paving the way for the true Guardian Master!