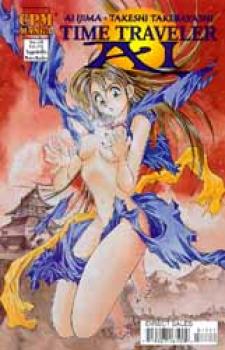 Time Traveler Ai is one of the funniest, sexiest comics around, with beautiful good-girl art by Takeshi Takebayashi (Battle Arena Toshinden; Maxion) and a wild script by Ai Ijima, the Tracy Lords of Japan! In this issue, she travels back in time to samurai Japan and discovers that she just isn't cut out to meekly wear a kimono when she lands at the court a great samurai master. She's a modern girl, and whether she's arming herself with swords and fighting sticks, or going for a run around the grounds in a 20th-century jogging outfit, she causes quite a stir among the locals, who've never seen a woman quite like her! Ai Ijima ¿ with her trademark suntan ¿ will make your heart beat a little faster too!