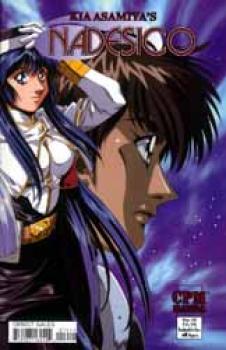 Kia Asamiya (Dark Angel) does comics like no one else. This Renaissance man of manga does fantasy adventure, comedy, drama, and in Nadesico, he creates fantastic space machines and gorgeous, strong worthy of EC's Wally Wood. It's an all-battle in this issue as young genius Ruri Hoshino and the cute robot 99 guide their ship into battle when they reach "The Edge of Jupiter." Why do the Jupiterians' mecha look like ancient Japanese sculptures? Could it be because the mysterious aliens are discovered to be--from the past? From the Earth itself? Nadesico is filled with inside jokes and references to other sci-fi anime and manga, but it never slows down the action and this pulse-pounding issue brings you into the heart of the battle for the fate of Earth?