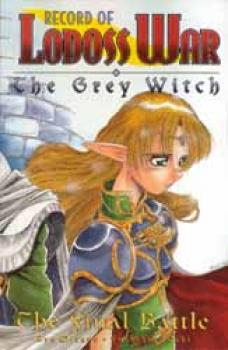 Now, for the first time, the entire Record of Lodoss War: The Grey Witch saga is available in graphic novel format. This is where it all began, the first Lodoss story to spring from the mind and pen of Ryo Mizuno, creator of the entire Lodoss universe of best-selling anime and movies, games, and comics. It's the end of the road for the Grey Witch ¿ or is it? In the climactic final volume of the saga of the Grey Witch, Parn and his battle-tried companions fight the final battle with Karla, the Grey Witch! Will they be able to awaken Leylia, the young girl whose body Karla has stolen in order to stay alive and continue her evil schemes, or will the Grey Witch triumph? Will Ghim make the supreme sacrifice to defeat the evil witch? Lodoss will never be the same after the heroes make their final stand against her dark and ancient evil sorcery. This third Lodoss: Grey Witch trade paperback collects Grey Witch comics #16-22. More adventure, magic and mystery from the pen of Ryo Mizuno, with superb, woodcut-inspired art by Yoshihiko Ochi.