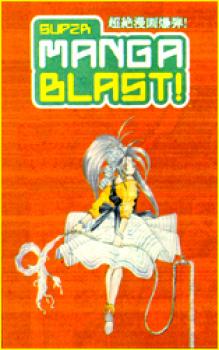 Round out your year with a giant serving of Super Manga Blast! This issues starts off with another Oh My Goddess! "lost" episode, as Keiichi plans for some romantic time alone with the goddess, Belldandy. Will his seaside excursion lead to their first kiss¿or to disaster? In 3x3 Eyes, Pai is now a student and Yakumo is a homeless wanderer, frantically searching for his lost friend. Is this a different reality¿or has something very strange happened to Pai and Yakumo? For hilarious comic relief ¿ not one, but four What's Michael? pieces grace this issue's pages! Plus, in Shadow Star, a murderous, maniacal teen has cornered Akira, while Shiina battles his deadly dragon! And in the science-fiction serial Seraphic Feather, Sunao gives the mysterious Attim M-Zak and Kei a lunar tour, winding up at a Chinese restaurant¿and maybe winding up dead! Every issue of Super Manga Blast! brings you five full-length features for one low price, only from Dark Horse! Also check out Oh My Goddess! in its own monthly series!