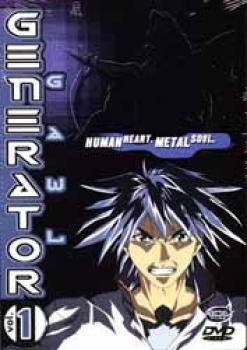 October 2007: Professor Takuma Nekasa uncovers a gene code that will unlock the human body&#39;s greatest mystery. Later, that discovery will lead to the manufacture of the deceptively human-skinned Generators. Now, it&#39;s up to two young, time-traveling scientists and their friend, Gawl, to stop this future threat. But the metal mutations have also traveled back into the past to stop them, and Gawl must become the very thing that he hates in order to save our world -- and his own! Approximate running time: 75 min.<UL><LI>Audio: Japanese and English<LI>Subtitles: English<LI>Extra features: Character profiles, ADV trailers<LI>Region: 1</UL>

For anyone who has seen a decent amount of anime before this, these first few episodes of Generator Gawl won't sport anything particularly new or groundbreaking. The sharp, stylised character designs with weird hair, the obligatory monster of the week to battle after transforming into a vaguely robotic being (this being post-Eva, said robotic being must show clear signs of being organic in nature, though), the high school setting with budding love triangles and the typical brash 'n goofy shounen hero who tends to think with his stomach. It's all there, and chances are you've seen all of it done before. All Generator Gawl lacks to include -every- plot element one has come to associate with typical mainstream commercial anime would be an excuse to collect and raise hundreds of silly critters.

That said, Generator Gawl does show some faint glimmers of promise in these early episodes. The main frame of a rather obtuse plot is established here, with a lot still left to be explained. There have not really been any major revelations so far, but just figuring out the basics of the whole intrigue is fairly enjoyable. There are parts of the plot that leave you guessing without being so confusing as to just irritate the viewer. Even the characters, who haven't veered from well-known stereotypes so far (the cool, controlled guy with long hair, the painfully shy and serviable cutesy girl with pink hair - the usual suspects, basically) may grow into some more rounded, interesting individuals as the series progresses. The potential certainly is there.

Apart from that latent promise, what we have here is really just an exercise in plain, harmless averageness. The art style holds no surprises, but is nice to look at with its bright, vibrant colors. The music contains nothing especially memorable, but the intro theme has a nice kind of catchiness to it. Some of the character interaction is fairly amusing and some of the plot is fairly intriguing, if nothing more than that. No matter how much the back of the pretty cool DVD cover wants you to believe otherwise, these episodes aren't absolutely stellar anime, nor are they utterly awful. It's just... there, I guess.
In fact, the only thing that stood out as unusual for me was that, for some reason, the DVD automatically plays some trailers before loading the main menu screen. Make of that what you will.